The Date Palm and the Tamarisk: A Legendary Debate


The gardens of Mesopotamia: What can they tell us about the Land Between Two Rivers?

In The Hounds of Zeus—a 6th century BC odyssey stretching from Babylon to the Altai Mountains of East-Central Asia—my hero's adventure begins and ends in his private garden in the Queen of Cities. So come along while I paint for you a general picture of the all-important gardens of Mesopotamia.

In this ancient realm, the walled garden was an urban innovation, creating by artificial means a natural landscape safely inside the city fortifications. It was a thing of beauty and usefulness; a public or private oasis of pleasure. There were palace courtyards where a king and his entourage often ate their meals; city parks and orchards, temple gardens, and hunting gardens containing all manner of zoological specimens. Many gardens were enhanced with artificial lakes and fishponds. The most famous of all, of course, was ancient Babylon’s Hanging Gardens, one of the Seven Wonders of the World.

What more can the gardens tell us? 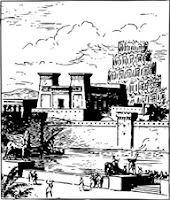 The past—as seen through history books—is often colorless and a bit dusty, like an old black and white film, but not nearly as interesting. Why is that? What colors the past; makes it breathe? "Way-back windows." Stories and legends; personal accounts; letters between friends and lovers, and all such glimpses of everyday life. They help us see “back then” through the eyes of the people who lived it.

By diving into the ancient world, seeking these “way-back” windows, we can find stories thousands of years old, chock-full of details, color, and breath. Incredible! One day, “back then”, a scribe took a tablet of clean-washed, smooth clay and, while it was wet, imprinted it with thoughts and ideas via wedge-shaped letters (cuneiform) cut with a stylus. Today, those words and, more importantly, the thoughts behind them, live on. That scribe shows us his lost world.

It's like channeling the past, only through clay tablets instead of a medium.

Here’s a written snapshot of a garden planted close to 2,900 years ago in the Assyrian capital of Nimrud by Assurnasirpal 11 (883-859 B.C.). In the king’s own translated words:

“I dug out a canal from the Upper Zab, cutting through a mountain peak, and called it Abundance Canal. I watered the meadows of the Tigris and planted orchards with all kinds of fruit trees in the vicinity. I planted seeds and plants that I had found in the countries through which I had marched and in the highlands which I had crossed: pines of different kinds, cypresses and junipers of different kinds, almonds, dates, ebony, rosewood, olive, oak, tamarisk, walnut, terebinth and ash, fir, pomegranate, pear, quince, fig, grapevine … The canal-water gushes from above into the gardens; fragrance pervades the walkways, streams of water as numerous as the stars of heaven flow in the pleasure garden… Like a squirrel I pick fruit in the garden of delights.”

THE DATE PALM AND TAMARISK

Here's a whimsical peek into another king’s garden and a glimpse of life 4,000 years ago. This popular piece of Babylonian literature was written in cuneiform on clay tablets as early as 2000 B.C.:

“The king plants a date-palm in his palace and fills up the space beside her with a tamarisk. Meals are enjoyed in the shade of the tamarisk, skilled men gather in the shade of the date-palm, the drum is beaten, men give praise, and the king rejoices in his palace. The two trees, brother and sister, are quite different; the tamarisk and the palm-tree compete with each other. They argue and quarrel together. The tamarisk says: 'I am much bigger!' And the date-palm argues back, saying: 'I am much better than you! You, O tamarisk, are a useless tree. What good are your branches? There's no such thing as a tamarisk fruit! Now, my fruits grace the king's table; the king himself eats them, and people say nice things about me. I make a surplus for the gardener, and he gives it to the queen; she, being a mother, nourishes her child upon the gifts of my strength, and the adults eat them too. My fruits are always in the presence of royalty'. The tamarisk makes his voice heard; his speech is even more boastful. 'My body is superior to yours! It's much more beautiful than anything of yours. You are like a slave girl who fetches and carries daily needs for her mistress'. He goes on to point out the king's table, couch, and eating bowl are made from tamarisk wood, that the king's clothes are made using tools of tamarisk wood; likewise the temples of the gods are full of objects made from tamarisk. The date-palm counters by pointing out that her fruits are the central offering in the cult; once they have been taken from the tamarisk dish, the bowl is used to collect up the garbage.”

My thanks to Stephanie Dalley for providing the inspiration and stories quoted in this article. She is the author of several books on ancient Mesopotamia and the intriguing article, Ancient Mesopotamian Gardens and the Identification of the Hanging Gardens of Babylon Resolved; Garden History, Vol. 21, No. 1. (Summer, 1993), pp. 1-13.